Freedom-Preneur: Religions From Around The World

We get to experience so many different cultures when we travel and different Religions of the World.  One of the most amazing parts of a culture is the religion that inhabits the people. Understanding the way others believe brings new perspective to the scene. Here are some of the religions we have experienced in the areas where we have traveled.

Many Panamanians Identify Themselves as Roman Catholics

Right now we are spending our time in Panama. This place is beautiful with its coastline and warm weather. There is not a national religion per se, but it is estimated that 75% of people identify themselves with the Roman Catholic church. A small percentage, maybe 20%, identify themselves as Christian or of another protestant sect.  This image is in Casco Viejo, the old town of Panama City.

Its a historical building and is a cornerstone in Casco Viejo.

We have also spent time in Nicaragua where many are also Catholic. They believe that Jesus was the Son of God and was born of the Virgin Mary. Protestants also hold this same belief. There two belief systems are pretty similar to one another.

One of the main differences is in the way worship services are held. Catholics hold mass on a daily basis with a very formal setting. Protestants typically meet once or twice a week in a more casual service.

Every country we visit we always go inside to look at the history and the culture of the regions. You can learn so much by the paintings on the walls and experience the history.   Each church always allows visitors and accepts donations for your visit, and we are always ready for the offering to show respect to the church and to the culture.  ( so always come prepared) 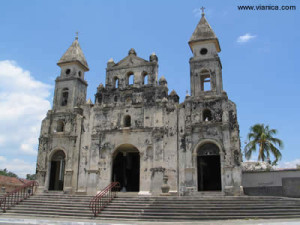 Nicaragua near Granada, stop by to see The Guadalupe church is located in the eastern part of Granada, at the street La Calzada. It was constructed in 1626 by Fray Benito Baltodano as a cloister.

In 1856 it was used by William Walker for 18 days as his last bastion. This caused damages to the church, which have later been repaired. Reconstruction took place until 1965. 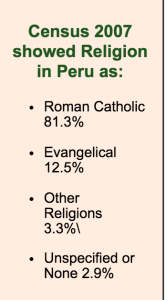 The religion of Peru is an inheritance of the Spanish conquest, for this reason, it is a mainly Catholic country (more than 80% of the population).

Since the 16th century, along with Catholicism, expressions of the native religion, based on the cult of the Sun, the Pachamama (Mother Earth) and elements of nature, have also been present.  Those who study religion, still can’t agree how to treat two very different religions in a process of fusion or of parallel beliefs.

A Guide told us that when Spain took over and the Catholics crushed their worship areas to the ground and build their churches, indigenous men were forced to build the new foundations and paint on the walls.

So you will see images of “Mother Earth” coming through the religious images the men were asked to paint.

When we lived in Cusco for 4 months we came at the right time.  It was celebration time!

The month of June is a huge celebration here in Cusco, Peru. It has been an amazing few weeks of festivals, ceremonies and parades!   We’ve been celebrating the Winter Solstice, Corpus Christi and finally Inter Raymi on June 24th.

Early in our traveling, we stayed in Indonesia where we sent Hanalei to school in Bali. What a great experience we had in that area. Indonesia recognizes six different official religions. Catholicism, Protestantism, Islam, Hinduism, Buddhism, and Confucianism make the list.

We lived in Bali where the primary religion is Hinduism.

Hinduism is a way of life that includes beliefs from Shaivism, Shaktism, Vaishnavism, and other 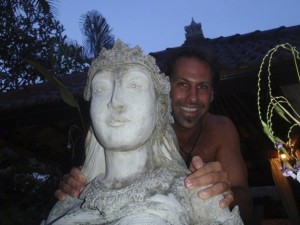 traditions. The belief relies heavily on karma, which is said to be determined by one’s actions. For example, when one does bad, they have bad karma which leads a bad outcome. Hindu’s also hold to the principles of dharma which is good conduct or the right way of living.

Islamic is a monotheistic religion, meaning one where they believe in one god. They read the Qur’an, which is a book that they believe are the words straight from Allāh. The book was written by the prophet Muhammad who was considered to be the last prophet appointed by God. Practicing Islamic live according to the five principles that are written in the Qur’an.

Confucianism is a philosophical and ethical system of teachings that steer the individual in the way they should live. The Chinese philosopher, Confucius, developed this form of thought through his teachings.

Buddhism is a nontheistic religion, meaning they do not believe in a god. This tradition is comprised of a variety of beliefs, practices, and traditions that was taught by the Buddha. His teachings consisted of many ideas that would put an individual on the path to reach Nirvana.

India is the Birthplace to Four Different Religions

India has a diverse group of religions that it claims birth to. Buddhism, Jainism, Sikhism, and Hinduism are among the list.

Jainism is a religion that does not believe there is a god or high supreme being. Those that follow this belief system are called to live in a non-violent manner. It also relies heavily on asceticism. Asceticism is the practice of abstaining from worldly pleasures.

Sikhism is a belief system that says there is a single god that rules over humanity. There was a lineage of gurus that have taught over the centuries. Each guru wrote part of the holy scriptures that outline how a person should live.

The King of Morocco claims he is a descendent of Muhammad, who was a prophet of the god of the Muslims. For that reason, there are many Muslims in the region. Christianity is the second largest religion in the region. Many are Islamic in the land as well.

At one time, Jews inhabited the area. The numbers have drastically dropped after many moved to Israel.

This video has nothing to do with Religion…but its really crazy.

Fiji is Full of Many Belief Systems 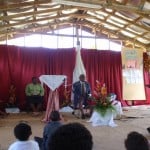 The native belief system to Fiji is a cross between animism and shamanism. Both of these belief systems incorporate divination that includes reading signs and omens to contact the spirit world. Through this interaction, the diviner is able to gain understanding into a situation or question.

We had the honor of attending a service on Mother’s Day in Fiji ( we were the only non-Fijians there and were invited by the Rugby Team we Sponsored)  There are many other practicing religions in the area as well. Christianity, Islam, Sikhism, and Hindu name a few of the belief systems.

Understanding the cultural beliefs of each area we live in helps us become more enlightened. We are a 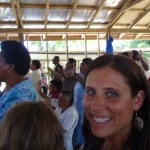 family that loves to learn together and experience what other cultures have to offer.

Providing great learning opportunities for our daughter is a huge passion of ours. Since we are able to travel, we can expose her to more life than she would living in the same house of her life.

I hope this post helped enlighten you on religions of the world.  We sure love sharing!

religions from around the world, world religions