On July 7th, 2011 we celebrated 13 years of being together. We met in Mission Beach, California, and haven’t looked back! Since then we have built a fortune, lost it all in a bad real estate deal, had our magical daughter Hanalei, re-built everything and decided to embark on an Endless Summer Journey living the life of our dreams!

It was also a special day in Cusco… the 100 Year Anniversary of the discovery of Machu Picchu. The 15th century Inca site was abandoned 100 years after it was built because of the Spanish Conquest. The Spanish were unaware of its existence, and it was only discovered by American historian Hiram Bingham in July 1911.

The Centennial Celebration for Machu Picchu was mesmerizing. The ‘Lost City of the Incas’ was lit up in the dark with fireworks, a symphony orchestra and a light show!

Below is a photo of the view from our living room taken on the day of our anniversary: 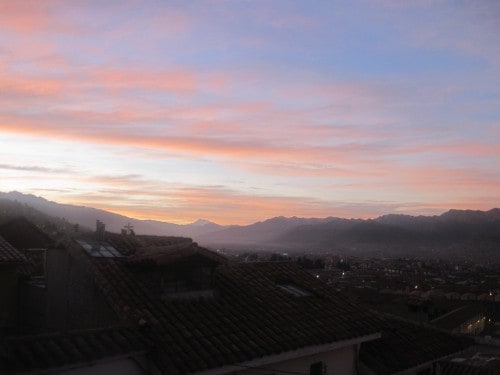