Why? Start With Why? 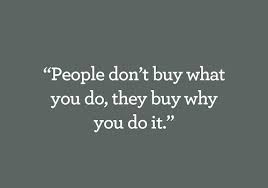 The above is a  video of a TED talk, given by Simon Sinek.

He describes how it is that great leaders inspire action, why some people are able to achieve things, when others are not. He explains the brilliant, biologically based “Golden Circle”, a new way of looking at how people approach what they do. He also discusses the Law of Diffusion of Innovation, and weaves it all together with several brilliantly told examples, from Apple computer, to the Wright Brothers, to Martin Luther King, Jr.]

The video above comes with my highest recommendations (it’ll change the way you look at what you do). Beneath is the “rough” written transcript.

How do you explain why some people are able to achieve things that seem impossible?

How is it that some companies, like Apple, year after year, always seem to lead innovation? Why is it that Martin Luther King led the civil rights movement?  Why is it that the Wright Brothers were the ones that discovered controlled, powered man flight when others were more qualified and better funded?

A few years ago I discovered something that changed my life, a pattern that I found in all the great leaders (individuals and companies). They all think in the same way, and it’s the opposite of everybody else.

It’s probably the world’s simplest idea (all I did was codify it).  I call it the “Golden Circle”.

It explains why some leaders are able to inspire where others aren’t.

Everybody knows “what” they do 100%. Some know how they do it. But very very few people or organizations know WHY they do it.

And I don’t mean to make a profit, that’s the result. It’s the “why”, why do you do it, why do you get out of bed in the morning, and why should people care.  Inspired organizations and people all think, act, and communicate from the inside out.

The Why, How, What model is actually grounded in biology (not psychology).

If you were to look at a cross section of the brian from top down, you’d see that it corresponds perfectly to the golden circle.  Starting at the top, our “newest” (evolutionary) brain, our Homo-Sapien Brain, called our Neocortex – it’s our what, it’s responsible for all our rational, analytical thought, and language.

The middle two section make up our Limbic brains, which is for feelings, trust, and loyalty, it’s also responsible for all human behavior and decision making. It has no capacity for language.

In other words, when we communicate from the outside in, yes, people can understand vast amounts of complicated information, features and benefits and facts and figures, it just doesn’t drive behavior.  When we communicate from the inside out. we’re talking directly to the part of the brain that controls behavior, and then we allow people to rationalize it with the tangible things we say and do.

Why would they use that verb?

Because the part of the brain that controls decision making doesn’t control language.  Sometimes we say we’re leading with our heart, or our soul. That’s all happening in your limbic brain.  But if you don’t’ know why you do what you do, then how will you ever get someone to buy into it, and be loyal, or want to be a part of what it is that you do.

There’s no better example than with the Wright Brothers.  Nobody knows, anymore, who Samuel Pierpont Langley is.

When you ask why people fail, they always give you some permutation of the same three things.

Langley was given $50K by the War department to figure out this flying machine. Held seat at Harvard and worked at Smithsonian. He was extremely well connected. He had access to the greatest funds and the greatest minds. He hired the greatest minds available, and the market conditions were fantastic. The NY Times followed him everywhere, everyone was rooting for him.

A few hundred miles away in Dayton Ohio, Orville and Wilber Wright, who had none of this “recipe for success”. They paid for it all from the proceeds of their humble bicycle shop.  Not a single person on the Wright Brothers team had a college education. Not even Orville or Wilber. And the NY Times ignored them.

But they were driven by a cause, by a purpose, by a belief. They believed that if they could figure out this flying machine, it would change the course of the world.

He was in pursuit of the result, of the riches.

In the end, the people who believed in the dream, worked with blood and sweat and tears, the others, just for the paycheck.Every time the Wright brothers would go out, they would have to take 5 sets of parts, because that’s how many times they would crash before they came home for supper.

Eventually on dec 17th of 1903, they took flight. And no one was there to even experience it. We found out later.

To prove that Langley wasn’t in it for the right thing, the day he found out that they had beat him to it, he quit. He could have said “that’s an amazing discovery, and I will improve upon it”. But he wasn’t first, he didn’t get rich, he didn’t get famous, and so he quit.

Which is important because the “law of diffusion of innovation.”

The lay of diffusion of innovation, shows that the adoption curve (a typical bell curve) can be segmented out into the following sections.

Of all our population:

If you want mass market appeal, mass market success or acceptance of an idea (the two 34% sides), you cannot have it until you have achieve this tipping point, between 15% and 18% market penetration.

I love to ask businesses, what is your conversion, and they respond proudly 10%. Well you can trip over 10%. There’s always 10% who will just “get it”, in fact, that’s how we describe them.

It’s this 13% that matters, as Jeffery Moore describes in “Crossing the Chasm”.

The early majority will not try something, until somebody else tries it first.

These early guys are comfortable doing that, living intuitively, based on what they BELIEVE about the world (the why), not just what’s available (the what). These are those who stand in line for 6 hours to buy an iPhone.

In fact what you do, simply proves what you believe (belief pyramid, also why judged by works, our works, or our “what” is the clearest manifestation of our strongest beliefs).

Famous failure about the principle of the Diffusion of Innovation.

Tivo. We said before that the recipe for success is the right money, the right people, and the right market conditions. They were the first, they were the best, they were extremely well funded, the market conditions were perfect, it became a verb. But they’re a commercial failure. They’ve never made money. And when they went IPO, their stock was about 30-40 and since then it’s never been above 10, usually below 6.

Tivo’s marketing strategy was “we let you pause live TV, rewind live TV, and we watch your viewing habits and adjust without you having to do anything”. It was all about what. And market skeptics said we’re not interested.  What if they would have said “if you’re the type of person that likes to have total control over your life, we have a product for you.”

People don’t buy what you do, they buy why you do it, and what you do is simply the proof, of what you believe.

In summer of 1963, 250K people showed up to hear Dr. King speak. There were no invitations, there was no website to check the date. He wasn’t the only great orator, he wasn’t the only person to have these ideas, and some of his ideas were even bad. But what he did, was to go around and simply talk about what he believed. “I believe…”

And people who believed what he believed took his cause and told more people. To the point where 250k showed up on the right day to hear him speak.

Listen to politicians now with their 12 point plans, they’re not inspiring anybody.

There are leaders, and there are those who lead.

And it’s those who start with why, who have the ability to inspire those around them or find others to inspire them.

WOW This was the most powerful video and lesson.  What did you think?

Simon Sinek, Start With Why

How A Corporate Executive Left Her Job To Live An Eat, Pray Love LifeBlog
What Are The Best Times To Post On Facebook?Blog