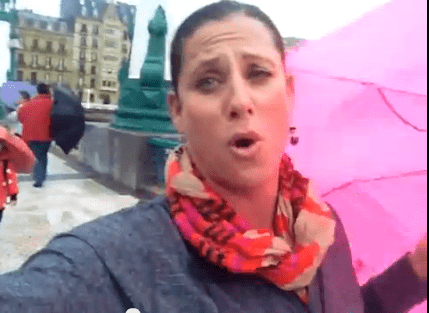 Have you ever had your umbrella “FLIPPED” backwards from the wind?

Well, yesterday was the test of the the umbrella…and guess who lost?  Yes, the pink umbrella.

But it all happens for a reason…

We arrived in San Sebastian, Spain last week and were ready to start our normal process of “settling in”.

Talking to schools, finding a long term house and learning our surroundings….well something went wrong,

When we arrived to San Sebastian, the International School St. Patrick’s had filled her space, and they would

not allow Hanalei to attend the school and were going to put her in a Basque school..NOT going to happen.

So we took a step back, and realized that this whole time everything was feeling forced and not flowing as

we are so used to living life….

may not be the best place for us to live!!

We started talking to one of our friends about other options like Portugal, Madera Island, South of Spain,

and then Tenerife one of the Canary Islands came up in the conversation.

Tenerife is the largest and most populous island of the seven Canary Islands;

inhabitants, 43% of the total population of the Canary Islands

The nickname of the Canaries comes from it’s climatic conditions.

Spring temperatures dominate throughout the year.   The average lies between 20-22°C.

and rarely gets higher than 30°C on the hotter days.

The Perfect Location for the UNSTOPPABLE FAMILY!

Tenerife is called the “Island of eternal Spring” because of its equilibrated climate and abundant vegetation in the North.

The Passat winds which go through the high mountain and the cool sea current are to thank for the good and balanced climate conditions the whole year round.

Tenerife has different climatic zones. In the Northeast moist woods, at the North abundant vegetation, over 2,000 meters height lunar like landscapes, between 1,000 and 2,000 meters big forests and in the South dry and sunny weather. Besides that we find 3 different cloud climate zones:

– The land below the clouds there is almost the whole year a warm subtropical climate with a lot of sun and sporadic rain.

– The land in the clouds (between 500 and 1,200 meters ) there is high humidity, higher rain precipitation and cooler temperatures also in summer.

– The land over the clouds has the greatest temperature changes between night and day and summer and winter. During the day it’s warm and dry, by night it can be very cool.

We would never have this opportunity to just get up and go it it wasn’t for our decision to work for ourselves online!

Gratitude is at its highest right now for the Unstoppable Family.

Wonder what it is we do still?

Take a look at the amazing line of products we offer.