How To Celebrate Halloween In Spain?

Since we have been traveling for the last seven Halloween of Hanalei’s life we have found a new way of celebrating the holiday.

Unlike the United States Halloween has a different meaning in Central, South America and in some countries of Europe.

Halloween was first celebrated by the ancient Celts, who were around as long ago as 800 BC, as the festival of Samhain,

which marked the end of the harvest and the beginning of winter, when the Celts believed spirits of the dead returned to earth.

In Central and South America and many countries around the world the day after Halloween is the most celebrated.

This day is called the day of the dead.

When we lived in Peru, Mexico and Brazil we celebrated the day of the dead along with Halloween.   But we put a bit of a twist on the celebration. Because these countries do not celebrate Halloween as

we do by trick or treating dressing up in costumes and going from home to home we created it for them.

Hanalei has always given more candy than she has received in the last seven years of her Halloween  celebration years.   Our family  dresses up and have candy in her bag and Hanalei gives candy away

to the children she passes by throughout the evening.

persons face that either gives or receives candy.

I hope all of you enjoyed your Halloween on October 31,

we are celebrating the day of the dead here in Spain on November 1. 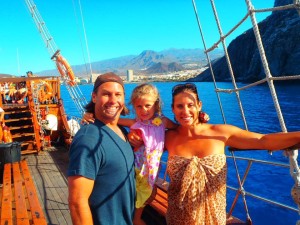 Go Out and Be UNSTOPPABLE Today!

What Does Puffy Jackets & Boots Have To Do With FREEDOM? [Unstoppable Freedom-Preneur Video Series ]Blog
Unstoppable Philosophy of Living & GivingBlog