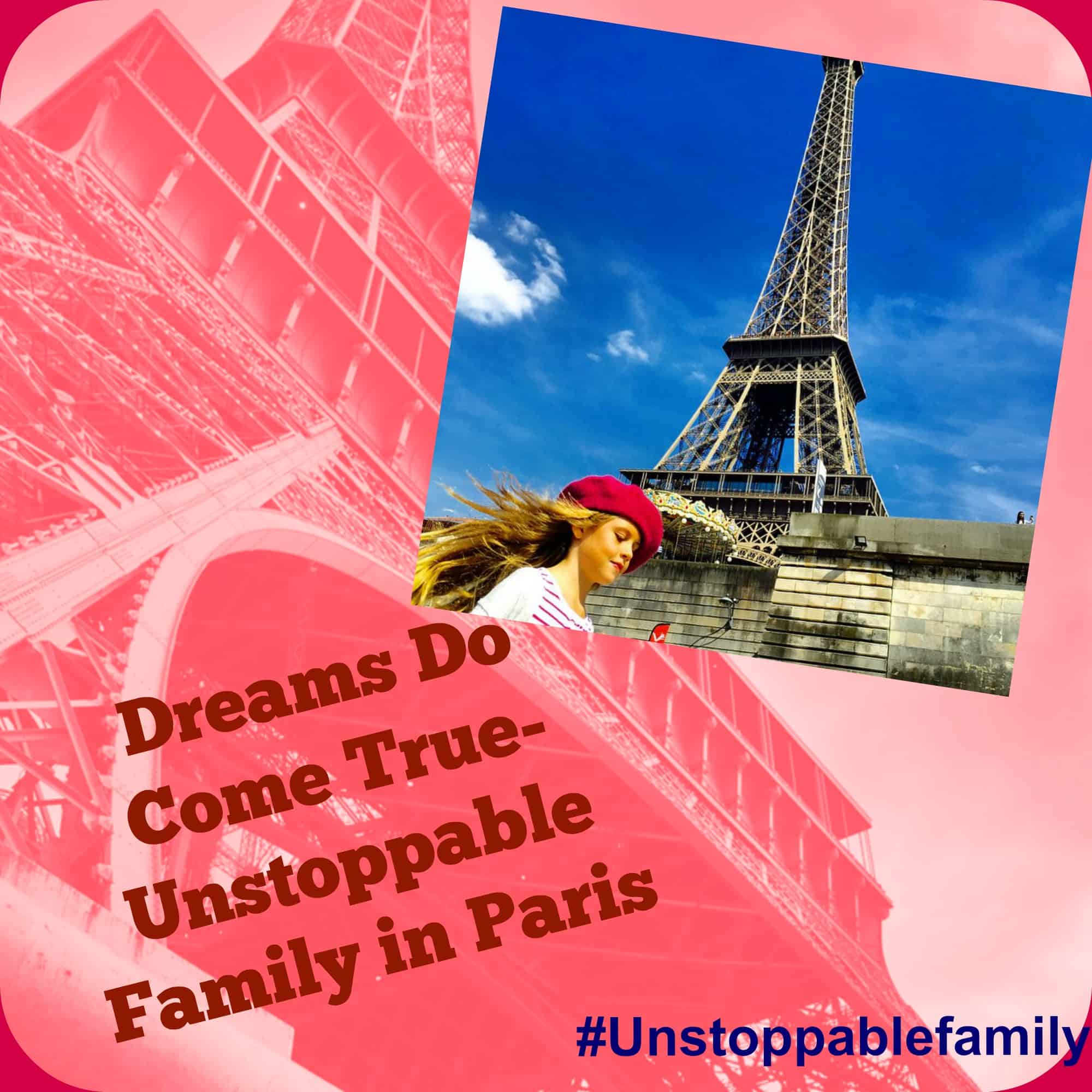 Have you seen us hanging out with the Eiffel tower? I’m here to tell you that Dreams Do Come True! We set a challenge and a goal for Hanalei Swan-Unstoppable Family last year from August to December that if she got 100% on her spelling tests she would go to Paris.

She was patient and waited until now to celebrate her “year of 8″ an bathe in her hard work! This was just as much of a goal to get her here as it was for her winning it, making this trip a full family WIN!

Of course, we can’t go anywhere without it turning into an adventure. We couldn’t even get on the plane without something going down.

Here’s what went down:

We’re on the flight..but Norwegian almost stopped us!

We were 1hr and 40 minutes before departure and the lady at the check in said..”you missed the flight”???

You emailed us you were 2 hrs late, we called and you said you were 2hrs delayed… What gives?

Well sorry you cannot go we are leaving earlier than we thought.

As you can imagine this did not sit well.

Hanalei starts crying, and we talk her into letting us on the flight…but here’s the catch.

No bags can go with you if you go on this flight, You have to leave them here, and they will not be shipped to you.

We must have shocked her because we said…”No problem, we’re going to Paris with our bags or not..she earned this trip”.

The Unstoppable Family boarded the flight traveling light this trip…and we were ready to do a little guilt free shopping.

As you can see from this short film, we jammed a lot into the three days that we were there. We went to Disney, check out the Mona Lisa…and of course, we took an incredible tour of the Eiffel Tower. If you have never been to Paris, this is sight is just as amazing as you could ever imagine. 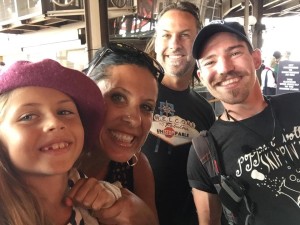 We had the most incredible tour guide, Antoine. He is a local Parisian and literally knew everything about his amazing country and history of the Eiffel. What was best is that he added his own personality to the tour which made it a fabulous experience.

I’ll tell you all about the Eiffel Tower in just a minute, but first, let me take a selfie! Antoine was the best. He even decided to take a picture with us. He made it a trip that was worth it.

Facts About The Eiffel Tower

We were able to learn a lot of cool facts about the tower. Check these out. I bet some will make you laugh. 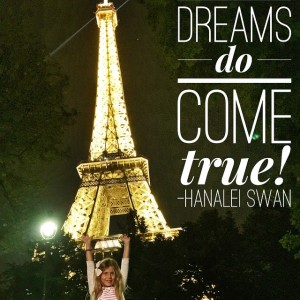 -Did you know that Eiffel Tower was not intended to be a permanent addition to France. It was built for the purpose 1889 Paris exposition.

-…And thank goodness it was saved, because it is the most visited paid monument in the entire world.

-Even Hitler came for a visit, but the French didn’t make it easy for him. They cut the lift cables so that he would have to climb the steps to reach the top.

-If you can believe it, a con artist named Victor Lustig actually “sold” the tower to a scrap  metal dealer…bet they were disappointed when it fell through.

-I bet Spain is sad that they rejected the tower when it was brought to them for construction. It was supposed to be placed in Barcelona.

-Due to the way metal expands, the tower can vary in height by up to 5.9 inches depending on the weather. That is a lot of expansion.

-What better thing to do from the Eiffel Tower than to test out a parachute you designed yourself…or maybe not. Franz Reichelt tried this out and ended up dying. Don’t try this at home folks.

-If you want to walk up to the top, you’ll have to hike up 1,665 steps. I call it the original stair master. Buns of steel, here I come.

-There’s no doubt that some people are totally in love with the tower…I know Hanalei was. However, I don’t think she loved it as much as Erika La Tour Eiffel…who chose to “marry” the tower in 2007.

-This place is lit up like Christmas at night with somewhere around 20,000 light bulbs. It’s simply gorgeous.

-Other cities are jealous of Paris and have made their own version of the Eiffel Tower. You can find replicas in 30 different places around the world. 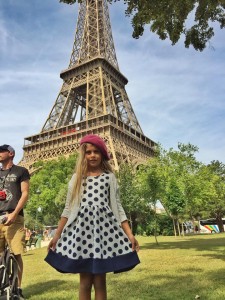 -If you were to paint the tower, you’d need somewhere around 154,000 pounds of paint. That’s the equivalent of the weight of 10 elephants.

-Check this out, Gustave Eiffel made himself an apartment at the very top of the tower. Talk about a view. I’d say party’s at his house.

-It’s not the size that matters…or maybe it is when it comes to towers. London tried to build a tower that surpassed the Eiffel in height. It only took 16 years for them to have to demolish it because of how unstable it was. Epic fail.

-Good thing France had the designer of the tower, Gustave, on their side when the Statue of Liberty was built. He was responsible for the design of the spine of the statue. He must be good, because it’s still standing.

-When it was constructed, it was the tallest building in the world, and it was a massive undertaking. It took 300 workers, 2.5 million rivets, and 18,038 pieces of wrought iron to build it.

-Thank goodness they built it when they did, because if we decided to build it today, we’d need somewhere around $31 million dollars.

We really enjoyed our time in Paris. Hanalei has determined…one day…she will return. 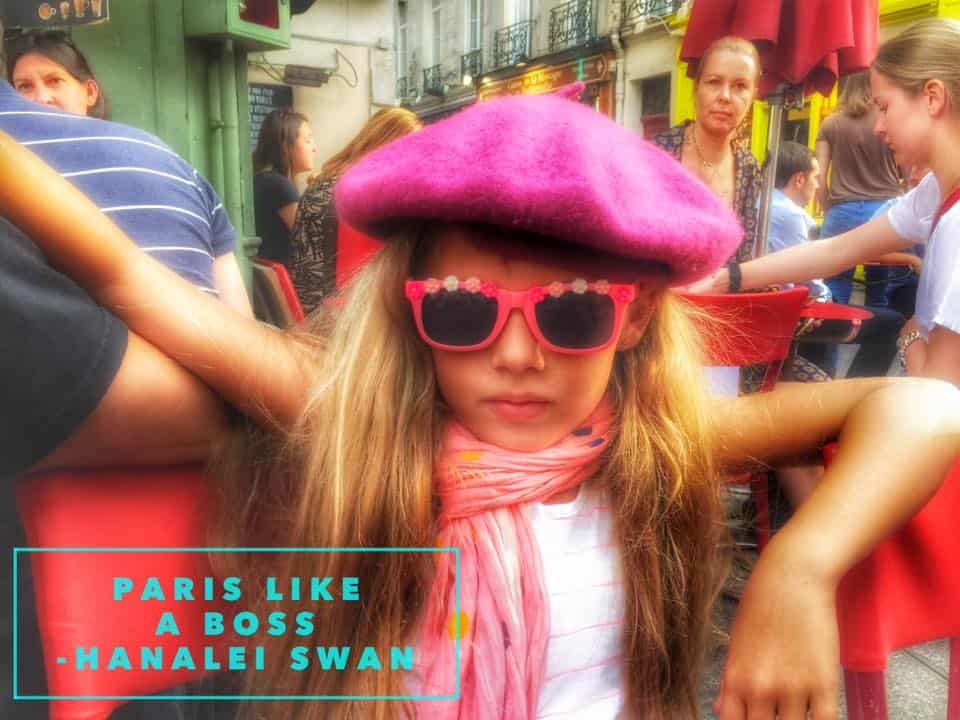