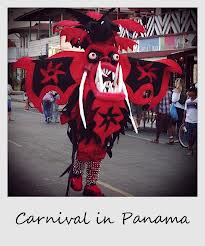 Carnival was heating up last night in Bocas Del Toro and the Unstoppable Family was here to experience our 3rd Bocas Carnival and we were not disappointed.

The  video above we shot of Unstoppable Swano a few years back when he decided to take on the Diablo.

Bocas Del Toro is Spanish meaning “mouth of the bull,” which is  the best description for this town situated in the rain forest of Panama. However, the name also perfectly describes Bocas Del Toro festivals …dangerously fun.

This week Bocas has lived up to it’ name and reputation.  It’s Carnival! and the celebration is a spectacle here in Bocas.   The celebration is a 5 day party where the loud speakers take over each section of the street, blasting the traditional Panamanian music that you cannot help but move too.

There is non-stop dancing and devils with whips cover the streets at dusk.   Panamanians, adults and children all dress up as “diablos” (devils) to take on the tradition of  facing the devil and cleansing of your sins for the year.

The costumes are homemade by each diablo himself.  They are wildly designed and huge in size!  We spoke with one of our local friends “Licho” and he said his costume is typically over 20-30 lbs. in weight.  Made of paper mache, cloth, and some plastic and take them upwards of 2-3 months to make.  The legs include bells which jingle as the diablos march and dance through town.

The festivities begin about a week before Carnival even starts, the masked red, black, and some white diablos  come out in the mid afternoon and put on street spectacles where they dance and entice the willing to come up and be confronted with their “wipis” or whips.

Only the brave ( or the stupid) take the leap and step into the “game zone”  where they take on the diablo in a sort of dance style fight…until the diablo raises his whip and starts cracking.

Carnival in Bocas Del Toro is at the “ROOT” five day religious celebration.

The festivity rejoices the end of evil. ( hence the diablos)

On the fifth day, the Tuesday prior to Ash Wednesday, sin is killed as represented by the devil, and on Ash Wednesday the community awakens for a fresh start in preparation for Lent.  The Bocas community throw themselves wholeheartedly into the event. Everyone enjoys themselves, even if they are not affiliated with the religion.  After all, it is one of the best celebrations held in the town to participate in and we are happy to have experienced Carnival ( Boca’s Style) for the 3rd time. 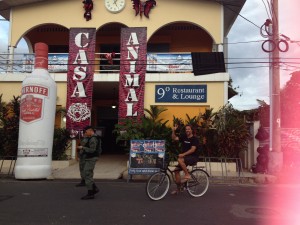 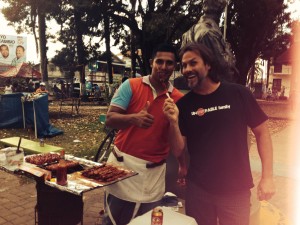 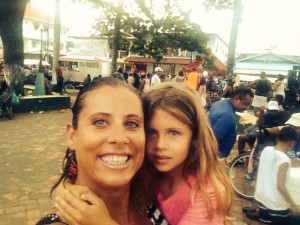 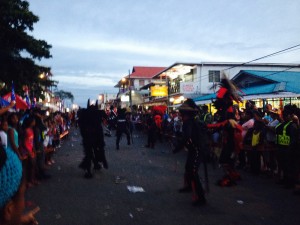